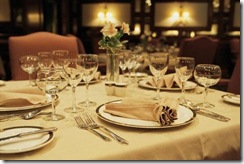 Most of you will be familiar with my rural upbringing, redneck ways, and generally unsophisticated approach to life. So you should also appreciate that when I first moved to Chicago and took a management position with UBS Warburg that I was really out of my element. My peers were primarily white middle to upper class Chicago Suburbanites with a good college education and an appreciation for finer things in life; while I had barely stayed awake long enough to graduate from a Mississippi Public High School, served a few years in the Army National Guard, many more enlisted in the US Navy, and the closest I came to going to college was driving over to the Mississippi State University pool on a hot summer afternoon.

I hadn’t been in the new position more than a month when my boss called me in and explained that I was to travel to California and beat a large, well known software company about the head and shoulders due to their inability to deliver on a ten million dollar contract, which they were six months behind on and our project was subsequently five months behind. I was to either obtain a clear conviction that they would deliver in the next month and understand why they had failed to deliver up to this point, or cancel the contract and come home.

The administrative assistant put the whole travel together and was handing me a packet with everything I would need as well as debriefing me. I warranted a corporate credit card, which she assured me had no credit limit – she said she didn’t know if I could get away with it for long, but that if I took to the local Lexus dealer I could buy any car I wanted on it. She then handed me round trip, first class tickets, and membership to the airline’s Platinum Club. By the time she was done, I was pretty well convinced that I had arrived!

When my team and I stepped off the plane in California, we were met by this fellow holding one of them nameplates, with my name on it. He put us in the huge stretch limo and drove us into town where we checked into our hotel. I must tell you, that up to this point, I really believed that hotels like this one only existed as mockups in movie studios for use in James Bond movies. The suite they put me in was bigger than any house or apartment I had ever lived in!
After checking in, we traveled (via limo!) out to the company’s campus where we began to engage in the process of getting assurance of delivery in the near future. It was harder than it sounds, and we spent the balance of the day locked in battle over this contract. By then end of the day I was exhausted, and we were going to have to come back tomorrow to pick up the conversation. I was looking forward to getting back to the hotel and relaxing in style, when our opponents mentioned that they would like to take us all out and treat us to dinner.

I was poised to say no thank you, when the unspoken communication and quick glances from my team assured me that such an action would likely end in them doing violence to me. So I acquiesced and we agreed to be dropped off at the hotel long enough to freshen up and then head out with them. Upon returning to the limousine we discovered that is was filled with “administrative assistants” (that’s how they were introduced, I swear!) who were associated with the project. It was never quite clear to me precisely how they were associated, but I suspect it was something to do with encouraging customers to continue to fund projects.
Anyway, they took us out to this swank little French restaurant, set me up as the guest of honor at the head of the table (apparently having the go/no-go decision for a $10M contract comes with this sort of arduous responsibilities) and we proceeded to have a good time and order drinks. I wouldn’t pretend to lie to you here, my head was swelled up the size of a hay roll; not a hay bale, but one of them big rolls you see in the pasture.

I reckoned I had indeed arrived! If only the folks from the trailer park could see me now! Yep, I was about as puffed up and full of myself as a man could get, and I was probably even breaking new ground in the field of self satisfaction as well. As I cast my eye over the table, and considered how awesome and cool I was, the waiter made his way to me and asked what sort of appetizer I would like.

I casually reached for the menu, and after a short double take, realized the thing was written in some language I didn’t know, presumably French! As I struggled to contain shock, I cast my eye for anything that made any sort of sense whatsoever, and my attention was drawn to what appeared to be Steak TarTare and I thought, I recognize that! I’ve heard of it in movies and what not, it is clearly something fancy that folks order. So I ordered it.

Everyone at the table congratulated me on my selection, and bemoaned the fact that they did not actually order it themselves. Needless to say, I was that much more impressed with my own prowess in navigating this new culture. Drinks came out, people were laughing and having fun, and I was enjoying myself to the hilt. Eventually, everyone had an appetizer, except me. At which point, the waiter asked me if I wanted my food prepared at the table or just brought out from the kitchen. I was all about seeing the show, and encouraged him to bring me said show, table side. He brought out this huge silver tray with a couple of mounds of raw chopped steak, some bowls a fresh diced vegetables, and some eggs.

Now, most of my readers are better educated than I, and likely already know what this fabled dish actually consists of, I was utterly ignorant. When the fellow asked me what I would like, indicating the vegetable, I just told him to put it all in there. He had these two massive sporks (that is a cross between 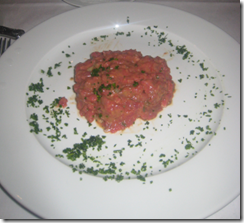 a spoon and fork for those who don’t know) that he used to crack the eggs, dish up the other ingredients, and go about mixing them all together. I was getting hungry watching, thinking that any minute he would fire up one of those cool little Bunsen burners and make me a miniature meatloaf right there at the table. As I sat there salivating at the idea, he just up and dumps all the raw mixture in the middle of my plate, stuck a stalk of celery in the top of it, and sat back all self satisfied, beaming back at me as if he had just done something good!

I might not be well educated, but it only took me a second to figure out that the raw stuff was what I had actually ordered, and everyone at the table was waiting on me to taste it and pronounce judgment! I managed to do so, and ate enough that I could claim I had eaten it without taking one bite more than absolutely necessary. I managed to finish the meal without losing it, and as the rest of the group determined they would go out for drinks, I begged off with the excuse that I needed to spend the night reviewing the contract and headed back to my hotel room. I may have arrived, but I really wasn’t so sure that the place I had arrived was where I wanted to be!