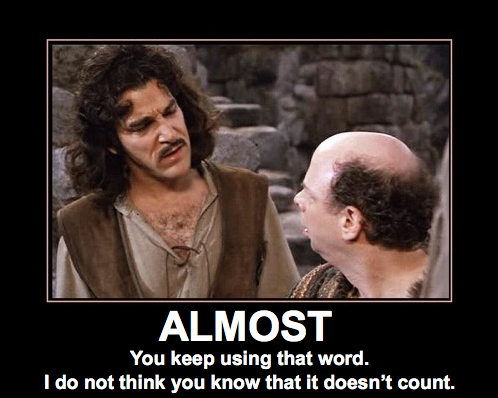 Folks ask me what I do for a living. I quickly solve complex problems with a high degree of accuracy.

They immediately ask me if I enjoy my job. I love my job. Why? Why do I love my job? Well, I have a fantastic boss and work with some awesome people, but more precisely.

I was six years old and I went squirrel hunting. When I returned to the cabin, Mawmaw asked me if I got anything. I was excited to tell her, “No! But I missed that squirrel by this much! I almost got him.” as I pinched my thumb and forefinger together allowing no more than a sliver of light to pass between them.

Pawpaw walked in, overhearing the conversation, and he flatly injected, “Almost don’t count son. You can’t eat almost. Miss by an inch or miss by a mile, you’re still going hungry.”

That simple teaching of wisdom in my grandparent’s kitchen buried itself deep in my psyche, putting down roots that plumb the depth of my thoughts. I became a man of absolutes, there are no grey areas, everything is black and white. I struggle to comprehend how the rest of you people live. There is only the data and the logical conclusions, True or False.

I love what I do for a living because my career is a sanctuary from the variables in the outside world. In this profession, we deal with absolutes. Period! In this job, this is what counts!

Not True is False
Not False is True


This is boolean algebra, denoting a system of algebraic notation used to present logical propositions. True and False are never equivalent, this is the solemn vow of boolean logic. In this profession, False is never going to break that vow and decide that it doesn’t need to not be True and it is just going to run off and become logically independent of True because it decided that it wanted to become Maybe, Might Have, or What If!

False is never going to come home from work one day and say you know what, I think I need my own logic space, see ya. Then George Bool has to come in and tell True, no, you can’t let False do that. You gotta go get False back!

Laying the foundation (in the 1800s) for the information age, Bool maintained that :

No general method for the solution of questions in the theory of probabilities can be established which does not explicitly recognize, not only the special numerical bases of the science, but also those universal laws of thought which are the basis of all reasoning, and which, whatever they may be as to their essence, are at least mathematical as to their form.

Pure boolean logic is the bedrock of digital circuitry and modern computing, and my job is to shape the stuff. As with squirrel hunting, almost just doesn’t count. If my solutions are not absolute, I go hungry … and I wouldn’t have it any other way.