New to Eve – What Should I Do?

A very common question. The Universe of Eve-Online is massive, in a very real sense of the word! The learning curve for Eve is Epic! 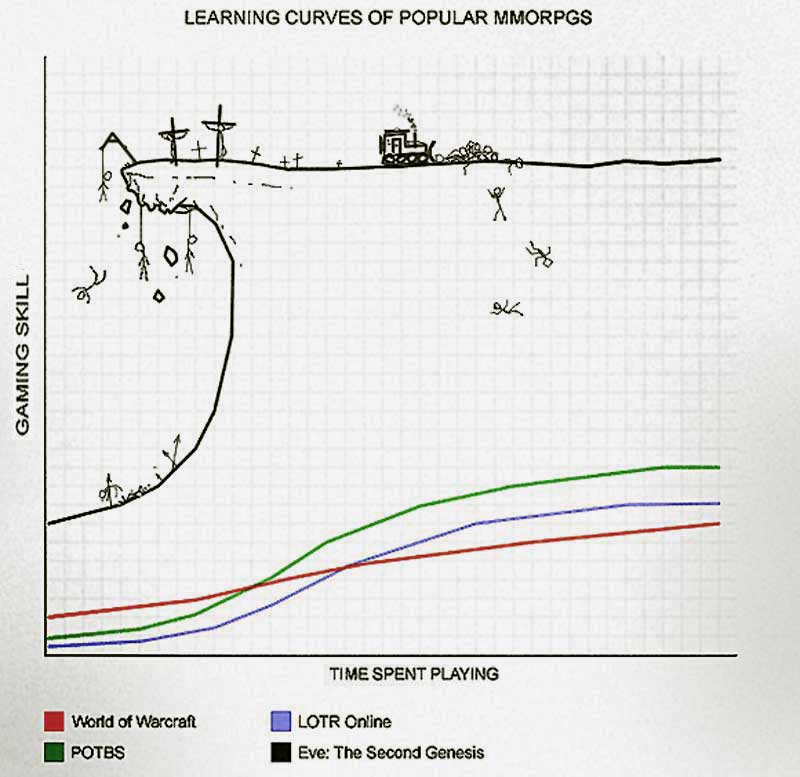 All fun and games aside though, this is a very difficult question to answer, many opinions abound and a number of those opinions are backed with a lot of number crunching to “prove” themselves. Akita T has perhaps one of the best known answers to the question in her post Guide & FAQ : New character creation. While her post is pushing two years old, it remains a standard. However, that standard is beginning to show it’s age. The introduction of Factional Warfare encourages much more of a “role playing” element than ever before, and while you could theoretically see a Minmatar fighting for the Amarr Empires Militia, it just isn’t reasonable (from a role playing perspective) to think that a Minmatar would actually do such a thing. Certainly there are those who would develop a story line and defend the idea, but not us.

We have our own opinions about Eve, Character Creation, and what one should do. Read on if our unscientific, non-number crunching approach, if of interest to you!

It is obvious to us, that if there are Rednecks in Space, the Minmatar Race is where they will most likely be found. We think of the Amarr as Celestial Bible Thumpers doing Door to Door Evangalism with a Laser, the Caldari are Socialist Pigs with a chip on their shoulders, and the Gallente are good old boy’s who think everyone would profit from Capitalism, Free Trade, and just want the opportunity to trade to mule with you.

You can probably guess that we would encourage you to stay away from the Caldari and Amarr races! Gallente is ok, heck, one of the best friends of the family is Gallente! But they just ain’t redneck enough. Minmatar is the way to go! And if there are Redneck Engineers in outer-space, then a Sebiestor TInker is just that!

So when you create your Character, go ahead an Choose Minmatar, Sebiestor, Tinker and you are well on your way to creating one of the best all around Eve-Characters possible! On top of that, you aren’t Caldar or Amarr!

Now, you start out with a relatively high Intelligence, and and a nice smooth baseline for all other attributes. There are many folks who will tell you to tank the Charisma, and stack INT/MEM or PER/WIL – bah on them, keep them all “level” and you will have the basis for a fantastically well rounded character.

You do plan on playing for years to come, right? If you simply intend to play for a year or so, then stack up whatever you think is fun wherever you think it should go, but if you are taking the long view, keep the spread as high and even as possible. Perhaps the argument this week is “but most ships and guns use Per/Wil” – that’s fine, until the next update comes out and they introduce a new line of skills that “everyone wants” and suddenly has a massive requirement for CHA/MEM or something like that.

So, you get yourselve a nice Minmatar, spread those stats real even like, give him a name (lets call him Skeeter), and log in!

This ain’t yer teenagers MMO, this is where the Big Boy’s (and Girls) play – that tutorial is going to teach you a bare minimum to get you moving around! Take your time too, because we are going to suggest that you get those learning skills under your belt first thing via The Ideal Learning Schedule!

This would be a good time to head over to http://www.battleclinic.com/ and pick up your own copy of Eve-Mon – a .NET application, written primarily in C#, and Open Source. It will be spectacular for helping you manage your character offline.

So, you are doing the Tutorial, and about half-way through, you pick up the skill Cybernetics. Start training this immediately, and don’t train anything else until you hit level 4 of Cybernetics. What, you can’t train it? Idgit – I told you to go with a Sebiestor Tinker and you didn’t listen, now you are off on your own, good luck!

Ok, once you hit level 4 of Cybernetics (will likely take you about a week) and you can get some nice implants (+4) for your attributes, this will have a drastic effect on your ability to continue learning. As you go through the tutorial you will pick up two more implants, plug them in as soon as your skills allow!

Now you have a problem, you have likely finished the Tutorial, have Cybernetics at level 4, and discovered that you can’t hardly do anything else. Ok, you can blow up rocks (a.k.a. – mining) but even the rocks don’t blow up as fast as you think they should. To top it all off, you realize that you can’t afford those very expensive +4 Implants.

The good news is, if we are friends, Bubba will provide them for you! I have to cash in all those loyalty points at some point anyway! If we aren’t friends, you are on your own. Keep in mind that buying them from swagvault.com would be against the EULA and I can’t condone that! Ok, I’ve given you your level 4 implants, you plug all five in, and suddenly feel incredibly smarter!

Now you need/want to run some missions! One of the simplest ways to improve your faction standing, make some money, and otherwise spend your time. But that starter ship you have, and those measly ship skills are just going to get you blown up! What you really want is to get into a Thrasher – the Minmatar Destoyer.

It will take you about two days (now that you have those cool implants) to skill up such that you can fly one outfitted like the link above. Sort out your training plan to fly it (Eve-Mon is your Friend) and just focus on getting into that ship as fast as possible.

Right, the next problem is that you can’t afford the skill books, much less the ship and fittings! Again, if we are friends, you are set – I’ll get you one fully fitted with requisite skill books to begin your Agent Mission Running. If we aren’t friends – you are going to have to sort this one out yourself as well. A few day’s latter, you will have the minimum skills necessary to get this bird in the air and run missions for your NPC Corporation of choice, might I suggest Republic Fleet – I think I will!

You will now have a lot of Agent Mission grinding to do in order to move up to level 2 missions. While doing this grinding, focus hard on those learning skills as laid out in The Ideal Learning Schedule! Yes, you will be sorely tempted to take an hour here and there to go train up your Gunnery, or Small Projectiles, or pick up Afterburners …. knock yourself out! But stick to that Ideal Learning Schedule until you have it maxed out – you will thank yourself for doing it a few months down the road!

That’s enough to get you started in the right direction! Certainly there is far more to it than this outline; however, all good stories begin with a solid outline – and this is just that. Send me a message in game (Redick) and I’ll come help ya declare war on that Astroid field, run those agent missions, or otherwise get us all podded!