The Big One That Got Away 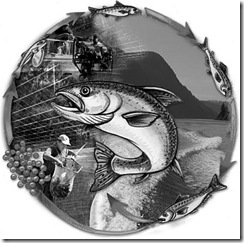 I got out of the US Navy at the end of the year 1999 and started a new job in Jackson Mississippi in January of 2000, where I met Tommy Jinks. Tommy and I ended up working together at the same company, and quickly determined that we were of the same disposition. Tommy was raised in the boondocks of Louisiana and enjoyed a rural upbringing, while I was raised in a trailer park in Mississippi on a rural route as well. We had both known the Brotherhood of War, enjoyed good company, and were fast becoming friends.

After a month or so of working together, we were well enough acquainted that it was common to get together on the weekend to BBQ and hang out. Tracey and I continued to maintain a house in Pensacola Florida, and on the weekend in question she had packed up the kids and headed there to take care of some maintenance, meet the renters, and ensure everything was in order, leaving me a geographic bachelor Friday through Sunday.

I arrived at work that Friday morning and was just getting settled in for the day when Tommy comes in and says, “Hey! Check out the parking lot.” I made my way over to one of the offices and looked down at the parking lot to see Tommy’s big old truck with a bass boat behind it taking up a whole row of parking spaces.

Tommy said, “I was thinking maybe we could sneak out of here at lunch today and head over to the Ross Barnet Reservoir to see how the fishing is.”

I hadn’t been fishing since moving to Jackson, but I had my rods and tackle in the truck just in case and it seemed a fantastic idea to me. So around lunch we took off up the Natchez Trace looking for a boat ramp that would get us in the water. Turns out we went further up the bank of the lake than we expected, and when we put in we were effectively at the point where the Pearl River began to create the lake.

We decided to head on up the river and check it out, ultimately we spent most of the afternoon exploring the lake, backwaters, and the river. At one point, we ended up in a backwater channel just off the river, and decided it looked like a great spot to fish. It wasn’t overly easy to get to, the center of the channel was roughly 20 feet deep and it stretched about 40 foot wide, with both banks lined with lily pads.

We didn’t actually catch anything; however, the entire time we were in there these nice sized catfish kept rolling on the surface (we call that sunning) and we spent some time discussing how nice it would be to come back to the spot one night and do some straight lining. That’s where you basically put a big weight on your line with no bobber and let the bait sit on (or just off) the bottom for the catfish to find.

We eventually packed up and headed back home before it got dark and agreed that it was a nice way to spend Friday afternoons and that we should skip work like that more often. I went on back to the house, it was pretty empty without the family, and spent a quite night with a book. I woke up the next morning and began casting around for something to do.

After cutting the grass, cleaning the garage, and various other bits of household chores, the phone rings and it’s Tommy. He mentions that he knows the family is out of town for the weekend, and wondered if I wanted to come over for lunch with Jodi and himself. Given the option of spending the rest of the day on my own, or with good food and better company, it wasn’t a hard decision to head their way.

After a fantastic bit of grilling, we were sitting on their back patio watching the grass grow and Tommy happened to ask me what I was up for next. As I was looking at his boat, I stated that, given the family was gone for the weekend, it would be a great night for me to head back to that little channel we found yesterday and spend the night straight lining for catfish. Jodi agreed that it sounded like a good idea and encouraged us to go on and make it happen.

After a little maintenance on the boat, a stop at the Gas Station slash Bait and Tackle shop for fuel and some stink bait, we were on our way. Now, it should be noted that Tommy lived south of Jackson, and the lake was north of Jackson, and the spot on the river we were headed to was a bit further north of that. So it took us a hot moment to drive all the way up there and get the boat in the water. Then we spent a bit of time casting around to get back up in the same channel we had found, but eventually we were there and all in place.

The day was just approaching dusk, and we quickly agreed that we should take advantage of the waning light to do some Bass fishing prior to setting up for the catfish. I put a spinner bait on and went to casting, and son! Let me tell you, I started snatching their lips off! It seemed like I couldn’t cast that thing without getting a hit, and every two or three casts I’d hook one.

Tommy was catching ‘em too, but his fishing got a bit impacted because I got started first I think, which meant every time I hooked one, he was a good friend and would come to the back of the boat with the net to scoop it in for me. By the time he was back at that front of the boat casting his own lure, I’d be hollering about getting another one. Nice size, 2-3 pounders too, good fights, lots of fun and adrenaline … the fishing trip that everyone hopes for when they head out to do it.

It was getting on dark, and Tommy said we should go ahead and get set up for cat fishing before we lost all the light. I reluctantly agreed, and we got the boat turned crossways in the channel, with anchors off each end to hold us in place. Then we rigged up our catfish reels and got them in the water. By that time, the sun had truly gone down and we were set to just sit back and smoke cigars while we waited on the catfish to find us.

I was still pretty pumped up about the bass though, lots of adrenaline and excitements, and I wanted some more of it. Sitting still wasn’t doing it for me. The moon had come out in its full glory, and as my eyes grew accustomed to the environment, it seemed to be bright as day. I decided that if I used a top water lure, and cast straight down the center of the channel, I could at least get a few more casts in.

So I found my jitterbug, got it tied on to the SpiderWire (a monofilament line that gives you an extremely high poundage of test for a much reduced diameter), and cast down the channel. Tommy asked me what I thought I was doing, and I explained myself. He shook his head, but didn’t really say anything else about it.

On about the third cast, I was listening to my little jitterbug swim back to the boat, pitter-patter-pitter-patter, and then suddenly there was a monstrous SPLASH! and the tip my rod slapped the side of the boat. I’m here to tell you that it was a once in a lifetime experience. I had clearly just hooked the grandpapa of all bass, and I’d be on the front page of the Bassmasters website tomorrow!

Tommy jumped up, grabbed the spotlight and net, and went to shinning it off in the direction of the splash. To no avail, there was nothing but white water and ripples where the lure had been, and I was struggling to fight the monster that swallowed my lure. I easily fought that think for five to ten minutes, it was like saltwater fishing. Over the course of the fight, Tommy and I discussed the possibilities. Whatever I hooked into was big enough to pull us off the anchor(s) twice, and multiple times it pulled all the line off the reel.

We had about decided that it was one of them huge channel catfish, probably a thirty or forty pounder by the way it was acting. I just stuck the tip of the rod straight up in the hopes of getting it to surface (I know, technically the wrong thing to do – but we wanted to see that thing!). Eventually I wore that fish out, and only just before it wore me out. It just laid down on the bottom of the channel, and I went to doing the whole strain to lift the rod up, then reel as fast as possible as I dropped it back down, then rinse and repeat.

Tommy and were both standing right at the edge of the boat, me reeling and Tommy holding the spotlight on the water where there reel was with his right hand, and the left hand holding the big net just over the edge of the boat to scope it in once it surfaced. With great expectations, we focused everything on that spot of water, and our patience was rewarded as the water broke.

Bursting out of the water, and up into the boat, was seven foot of alligator with my jitterbug hung off in the soft tissue just inside its nose! I feel back into the seat behind me and Tommy headed to the front of the boat. I managed to get one boot under the ‘gator’s chin trying to push it back out of the boat, and pulled out my knife to cut the line. Let me tell you, at that moment, I was bad regretting the decision to use SpiderWire … monofilament line don’t cut so easy. There I am, attempting to avoid either a heart attack or being savaged by the ‘gator and Tommy’s standing at the front of the boat with his arms crossed and shaking his head while he says, “Throw it back. It won’t fit in the live well!”

The line eventually cut, and the ‘gator (along with my jitterbug) sunk back into the depths of the channel. We took a moment to relax, and I had to relearn how to breath. Tommy took that spotlight and shone it around the channel, and we were easily surrounded by thirty or forty of the reptiles. Suffice it to say, we packed up our gear and high tailed it out of there!

Deer Season – How (not) to Rope a Deer