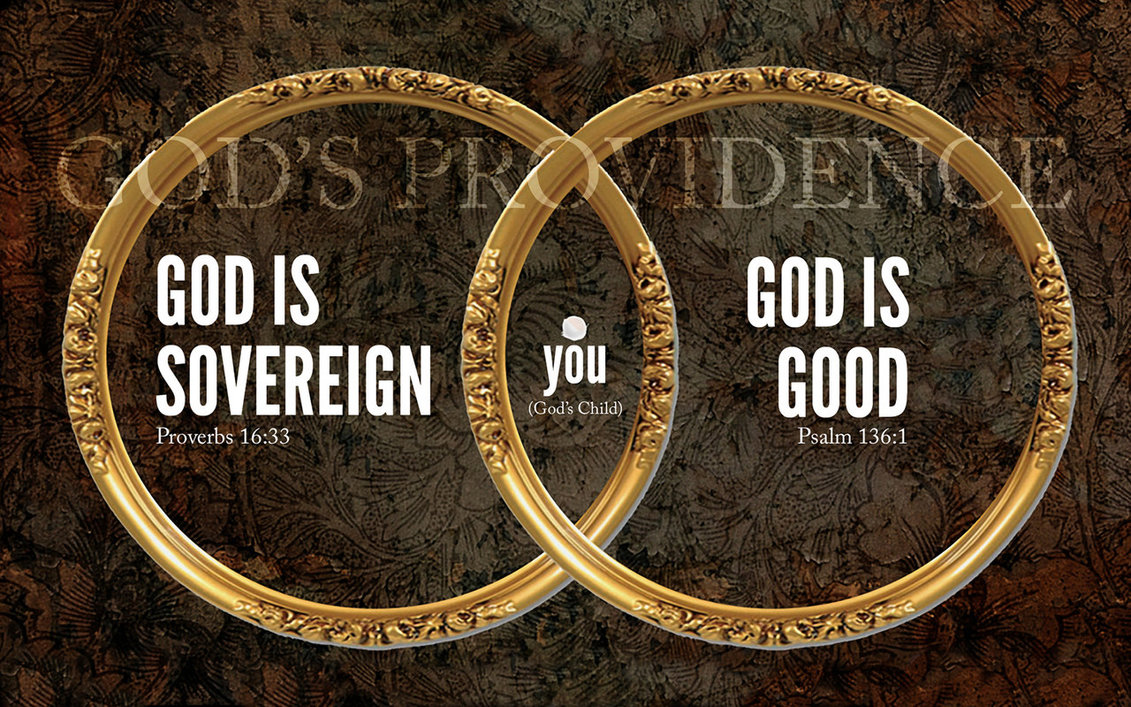 PROV ∕ IDENCE  3. In theology, the care and superintendence which God exercises over his creatures. He that acknowledges a creation and denies a providence, involves himself in a palpable contradiction;  for the same power that caused a thing to exist is necessary to continue its existence. Some persons admit a general providence, but deny a particular providence, not considering that a general providence consists of particulars. A belief in divine providence is a source of great consolation to good men. By divine providence is often understood God himself. – AMERICAN DICTIONARY OF THE ENGLISH LANGUAGE, Noah Webster 1828

Noah Webster, strong Christian, The Father of American Scholarship and Education (see Wikipedia), had such strong feelings about this particular word that he wrote a paragraph extolling and defending its value in his dictionary when a sentence could simply define it.

Perhaps the best known, one sentence definition was written by the apostle Paul in his letter to the Romans:

And we know that for those who love God all things work together for good, for those who are called according to his purpose. (Romans 8:28)

However, any systematic theology worth studying will have a chapter dedicated to the discussion of Providence (typically immediately after a chapter on the doctrine of Creation); and they all (at least, all of mine) require a paragraph to adequately and precisely convey the meaning of the term. Wayne Grudem dedicates 40 pages to the doctrine of Providence, and defines it as:

God is continually involved with all created things in such a way that he (1) keeps them existing and maintaining the properties with which he created them; (2) cooperates with created things in every action, directing their distinctive properties to cause them to act as they do; and (3) directs them to fulfill his purposes.

Most people already have a working definition of the term, so why do we need such care and precision in the definitions?  The simple fact is that while most have a basic understanding of what the word means, they don’t actually believe it, and many in America today will argue that it isn’t taught in scripture at all.

If the concept of Providence is false, then Romans 8:28 would be a lie; however, for those who would like to see more than a single proof-text reference, we have compiled a list ofapproximately 70 scriptural references to God’s Providence.  The weight of Scripture attests to this Doctrine so strongly that to refuse the doctrine is to refuse Scripture itself.

Once we accept that the concept, as taught in Scripture, is true; we might immediately ask Why?  To what purpose was this revealed to us in Scripture?  How does it help us? The Heidelberg Catechism (published in 1563) asks precisely this question:

What advantage is it to us to know that God has created, and by his providence does still uphold all things?

Answer: That we may be patient in adversity; thankful in prosperity; and that in all things, which may hereafter befall us, we place our firm trust in our faithful God and Father, that nothing shall separate us from his love;  since all creatures are so in his hand, that without his will they cannot so much as move. (See question 27 too.)

Not only do we find comfort, we also find that providence actively opposes three major doctrinal errors that are readily believed by many in our community today.  They are:

Providence asserts the personal involvement of God in every turn of human affairs, and his constant upholding of all natural process; directly counter to the Deist conception of God as detached from the current workings of the universe.  While the doctrine of providence teaches the personal involvement of God and Man, the Fatalist de-personalizes man by declaring mans choices to have no meaning and making no allowance for personal response.

Chance is perhaps the doctrine we all most easily believe in, any event complex enough to prevent our full understanding of how that event came to be is easily placed in the category of chance.  In the workings of the universe, history, and our own experiences, we tend to attribute to chance that which we don’t understand; as opposed to asserting God’s Sovereignty and personal attention to the choices we make, the situations we find ourselves in, and the results obtained.

It would be nice to just avoid the question; however, any conversation about God’s Providence will eventually come around to this timeless question.  We can be quite happy to accept that good is part of God’s Providence (Romans 8:28); yet simultaneously decide of our own volition that anything bad is outside of God’s Providence.  This ultimately contradicts the Doctrine of Providence and we must accept both if we accept the teaching of scripture.

Ruth provides an excellent historical narrative of how God can use our poor choices to ultimately bring about better things.  For example, we see that Ruth’s father-in-law chooses to leave the land God had provided, resulting in an Israelite breaking the Law and marrying a Moabitess (Ruth), the marriage was contrary to the revealed will of God (Deuteronomy 23:3) and thus it was a sin.

However, this made Ruth a daughter-in-law to Naomi, enabling her to be exposed to God and eventually come to the place where Ruth makes a choice to serve God(Ruth 1:16). God’s Law (as given by Moses) further provided the framework for Ruth to marry Boaz, and through this marriage Ruth becomes the great grandmother of King David (Ruth 4:17); entering her into the lineage of our Lord Jesus Christ, the Messiah (Matthew 1:5)!

God tells us through Scripture “For my thoughts are not your thoughts, neither are your ways my ways, saith the LORD.  For as the heavens are higher than the earth, so are my ways higher than your ways, and my thoughts than your thoughts (Isaiah 55:8-9) ; the correct response to our struggles with grasping all the details of the Doctrine of Providence is to:

William Cowper coined the phrase The Lord moves in a mysterious way, His wonders to perform and there is a great, comforting truth in the phrase.  Some doctrines revealed in scripture are hard, even Peter admits (2 Peter 3:16) a tough time understanding some of Paul’s teachings!

It is acceptable to not fully understand everything taught in scripture; the Christian is a disciple of Christ, and a disciple is a student.  We are continually learning through the process of sanctification.  However, it is not acceptable to disdain or discard any scriptural teaching, of which the doctrine of Providence is one, due to a lack of understanding.